School Orientation programme for the upcoming batch of S1 students’ parents was organised at Modern School, Barakhamba Road, on Thursday 28th March 2019. The event started with the enlightening talk delivered by, Dr Sanaya Nariman, M.ed, Ph.D. University of Bombay, who is also the Member of the Governing Body of Miranda House, University of Delhi. She enlightened the parents with the modus operandi that will lead in the positive development of a child’s personality. To realise the child’s full potential and comprehensible growth is a task, which should be executed by parents and teachers alike. 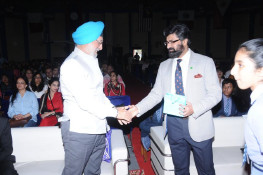 Mr Pavan Duggal, Advocate and Founder & Chairman of International Commission on Cyber Security Law, spoke on the perils of technology and made the parents aware about the possible threats of cyber bullying and social media. Mr J.P. Sengh, Sr. Advocate and mediator, introduced the concept of Mediation/Negotiation i.e. problem solving methodology amongst students, without any help from an elder. The parents were further motivated to inculcate conflict resolving skills in their wards. The Principal Dr Vijay Datta, formally welcomed the grandparents and parents present at the event. He further said, that the students ought to be inspired to be strong and resilient, believing in the power of one. He elaborated on the idea of holistic education. In the presentation, presented at the event, the school ideals and numerous activities were shown elaborately to the parents. Dr Datta also explained variegated parts of life skills which are an integral part of a child’s growth at Modern School. The concept of Emotional Intelligence was also talked about by the Principal and he also stressed on advocating Scientific Attitude in academics. 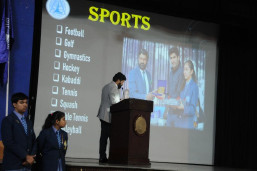 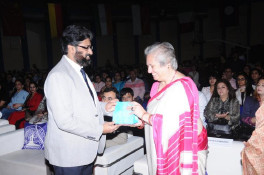 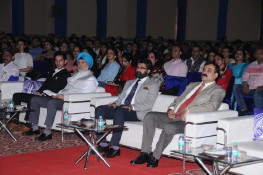 The event also witnessed a remarkable musical rendition by the students of the Western Music Club, Synchronicity who played ‘Eye of the Tiger’ and ‘Wavin’ Flag’ – a fusion where rhythm and melodies met the soul. The Orientation Programme culminated with a Vote of thanks where every parent was appreciative of the event and how it helped them to curtail their incessant anxiety and doubts. 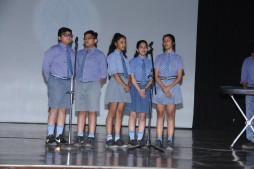 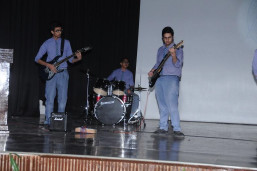